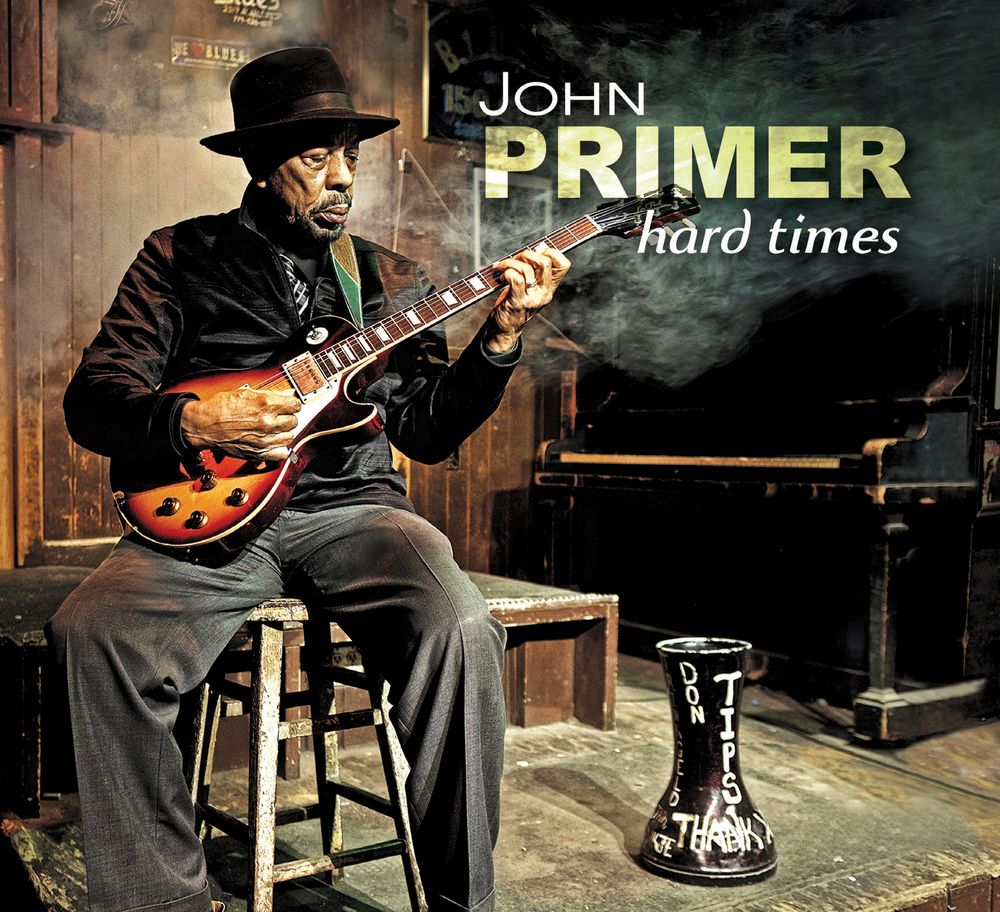 In 2017, he was inducted into the Chicago Blues Hall of Fame. His most recent CD, Hard Times, focuses on the loss of B.L.U.E.S on Halsted, a legendary Chicago blues club. John hopes the CD will shine light on the important blues landmark with the hopes that someone will save it.

Can you talk about your new album Hard Times?

I’m very happy with it, and I write all the time. I just wrote a song today and I am still writing. I haven’t quit. I think this CD is going to be great and people should go out and buy it. Check it out, because it’s all original music. It’s my music, my thoughts, my mind, and what I think about when I write. It is out now.

Where did you record it and how long did it take?

I recorded it at Rax Trax in Chicago with Rick Barnes. It took about five or six days to get everything down and about a week and a half to maybe two weeks to get it all together.

How did you come up with the guitar riff for “Hard Times?”

I just wrote it and knew I could play that riff any way on the slide because it’s in an open key; it is open G. I can play all that kind of stuff. It’s based on Robert Johnson style but I’m not playing Robert Johnson; I’m playing my sound so you know it’s me playing it. It’s a little more different in the way I play it, but I got the idea from his music. I play it my way.

“Hot Meal” is a fabulous tune. How and why did you write it?

Can you talk about all the blues clubs that you have seen close down? How does this make you feel?

That really makes me feel sad. Those places really kept the blues going for all the local musicians in Chicago. Most of the musicians on the circuit were playing locally. We would all meet at B.L.U.E.S. on Halsted and go play. It’s sad that the place closed down. The “Hard Times” music video was filmed inside and outside of the club. The video starts there. From then on, we went to another club that has been closed down for years which Buddy Guy used to own called The Checkerboard Lounge. I used to play there every Monday until it closed down. Going to the spots brings back memories.

Theresa’s Lounge was one of the places I played at for a long time. I played there from 1972 to 1980 when I got with Muddy, but I still was playing there when I was playing in Muddy’s band when we came back to town. That’s one of the oldest clubs. Many clubs were on the west side and those clubs are gone too. There are very few in west side Chicago. That’s why I did the video to bring back memories. It’s sad all those places are gone.

Who else is in the Real Deal Blues Band?

My drummer Lenny Media has been in the band about thirteen years now, maybe a little bit longer. He’s one of the outstanding drummers in Chicago.  We played with the same guys. We played with Magic Slim and The Teardrops. I left the group when he started playing. When I needed a drummer, I found him. He lives in Chicago and I knew his dad. His dad was a keyboard player and singer. He’s a real nice guy. Steve Bell on harmonica is the son of Carey Bell. I’ve known him for thirty years since he was six years old. Johnny Iguana is on keyboard, and he played with Junior Wells for a long time.

I have known Dave Forte for a long long time and he played with a lot of great musicians. He played with Toronzo Cannon when I met him. He’s a great bass player and he did all of the graphic design on the CD. He didn’t take the photo but he did everything else on the CD. Rick Kreher plays rhythm guitar. He and I were in the same band with Muddy Waters at the same time. My seventeen-year-old daughter, Aliya, sings a song. The Real Deal Blues Band came up with the music and it is track number seven called “Tough Times.” We put a lot of work into the CD and we put our heart and soul into it. You can tell by listening to it.

I learned how to play down in Mississippi. I learned more music when I got to Chicago. I learned all the music mostly in Chicago. I came to Chicago in 1963. Going to Mississippi and playing a blues fest is going to be nice. I hope some of my relatives come and visit me.

What did you learn from Sammy Lawhorn?

I learned a lot from Sammy. I watched what he did and everything. I knew how to play a lot of the stuff already. I studied all that stuff. I didn’t study one person like B.B. King and that’s it. Everybody that played a guitar, I learned it and played along with their music. I studied Lightnin’ Hopkins, Muddy Waters, Howlin’ Wolf, and Jimmy Reed. I knew that someday I was going to be able to play with one of these guys. I didn’t have a problem down at Theresa’s. I learned a lot from Sammy for seven years. I played there and learned a whole lot from him. He had his own style. He told me as a rhythm guitar player, he wasn’t worried about anyone cuttin’ his head.

He said, “When a person comes in and you are playing rhythm guitar, don’t worry about what they are playing or how good they sound. If you play that rhythm and you play it right and good, they gonna be noticing you instead.” That is the truth. I don’t brag, but people do tell me I am one of the best rhythm guitar players in the blues business in Chicago as I do it all. I learned a lot from Sammy and Junior Wells and all of the other guitar players.

I learned a lot from Louis Myers. He showed me chords and things. I listened to him, so I learned a lot from him. I was always playing the rhythm and the lead. I learned that on my own. I was in the house practicing. I always did that and it came natural to me. It sounds like two or three guitars.

What’s next for you?

On the Hard Times CD there is also a music video out, too.