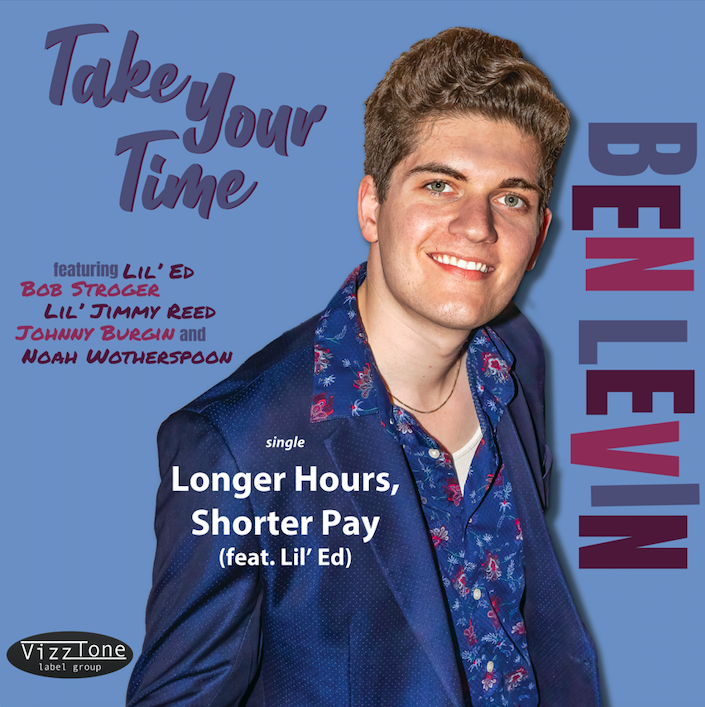 Cincinnati-based blues pianist/singer Ben Levin is a blues veteran at the age of 22. His three previous albums on the VizzTone label group have garnered him accolades including Blues Music Award and Blues Blast Music Award nominations for Debut Album of the Year, Sean Costello Rising Star Award, and Keyboard Player of the Year.

He has earned the deep respect of his musical peers across the generations, and worldwide recognition. As Patrick Dallongeville writes in Paris-Move, “Ben Levin no longer only embodies the next generation, he is the new boss.” Ben’s new album, Take Your Time, is coming out fresh after a European tour, including a spot on the Joe Bonamassa Keeping The Blues Alive At Sea cruise.

Ever since starting piano lessons at age 7, Ben has looked to his musical elders for guidance, and for this album, he decided to shift the spotlight away from himself and highlight some living legends of blues: 92-year-old bassist/vocalist Bob Stroger, Chicago blues legend Lil’ Ed, and Louisiana bluesman Lil’ Jimmy Reed.

Ben couldn’t be happier with the results and says, “with the help of the legendary guest artists, this album features the heaviest blues I’ve ever recorded in the studio. I’ve always had a lot of respect and revered the elders of blues, and these sessions are some of the highest honors I’ve had in my career so far.”

Today sees the release of the new single, “Longer Hours, Shorter Pay.” Ben’s tasty blues piano leads the band as Chicago blues legend Lil’ Ed steps up to play guitar and sing this tale of the workaday world, written by Ben and his father Aron Levin.